Varsity Revue is an all campus variety show. Over the years, Varsity Revue has become a tradition OSU students look forward to, but few know of the humble beginnings. The story begins with a 1929 editorial by the Daily O'Collegian editor, Joe Griffin. In his editorial he complained that the band's performances were lackluster and their physical appearance was poor. Band members were furious, but Griffin was willing to confront the problems he addressed. With the help of the Press Club, an agreement was reached. A campus vaudeville production was proposed. The show, along with the sale of "Beat OU" tags, would raise funds to buy university band uniforms. On November 18, 1929, the first Varsity Revue opened. The show went for many years to follow and was even kept afloat as many students were called to war. Since its inception, Varsity Revue has included men and women from the fraternity and sorority community, from student organizations and from residence halls in the performance. However, as time passed, fraternity men and sorority women truly embraced the Varsity Revue tradition, and, beginning in 2013, the Office of Fraternity & Sorority Affairs took over the advising role.

As we get more pieces of history, this page will continue to grow! If there is not a year recorded, it does not mean the production didn't take place, just that we don't have enough information. Let us know if you have something to contribute to Varsity Revue's History by emailing varsityrevue@okstate.edu. We love seeing old photos, videos, programs, and anything else that made your VR experience a memorable one! 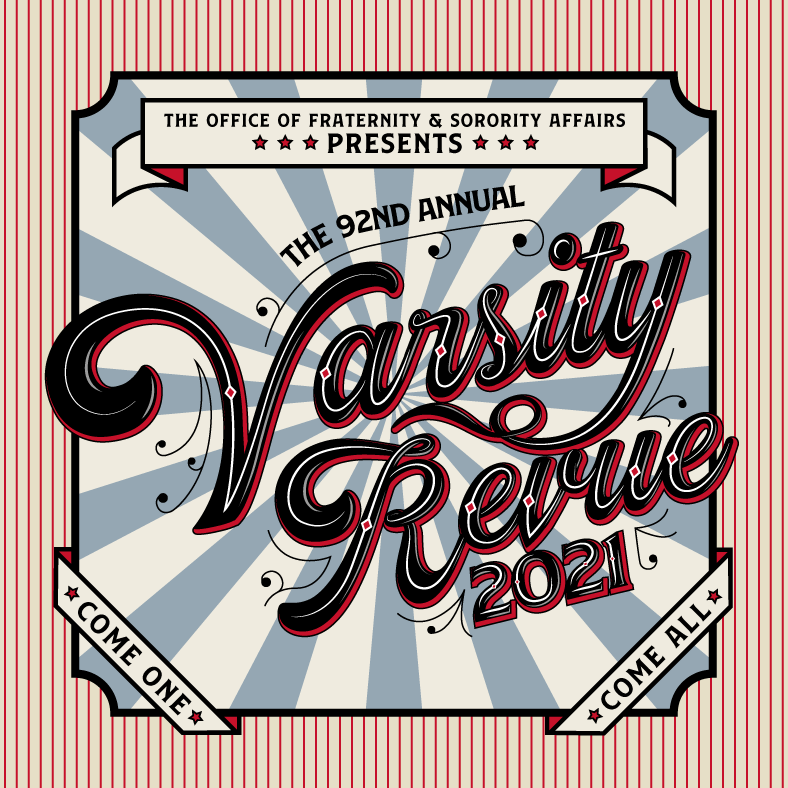 This year chapters were allowed to select their own pairings, and individual acts were placed in between group acts to entertain the audience with a variety of performances. Cast sizes were limited to 26 people to allow for social distancing on the Seretean Center stage, as well as masks were required to be worn unless performers were in a certain area of the stage. The beneficiaries this year were The United Way of Payne County & Coaches vs Cancer. Students raised a total of $25,000 for the philanthropies. The Saturday night live stream can be viewed here 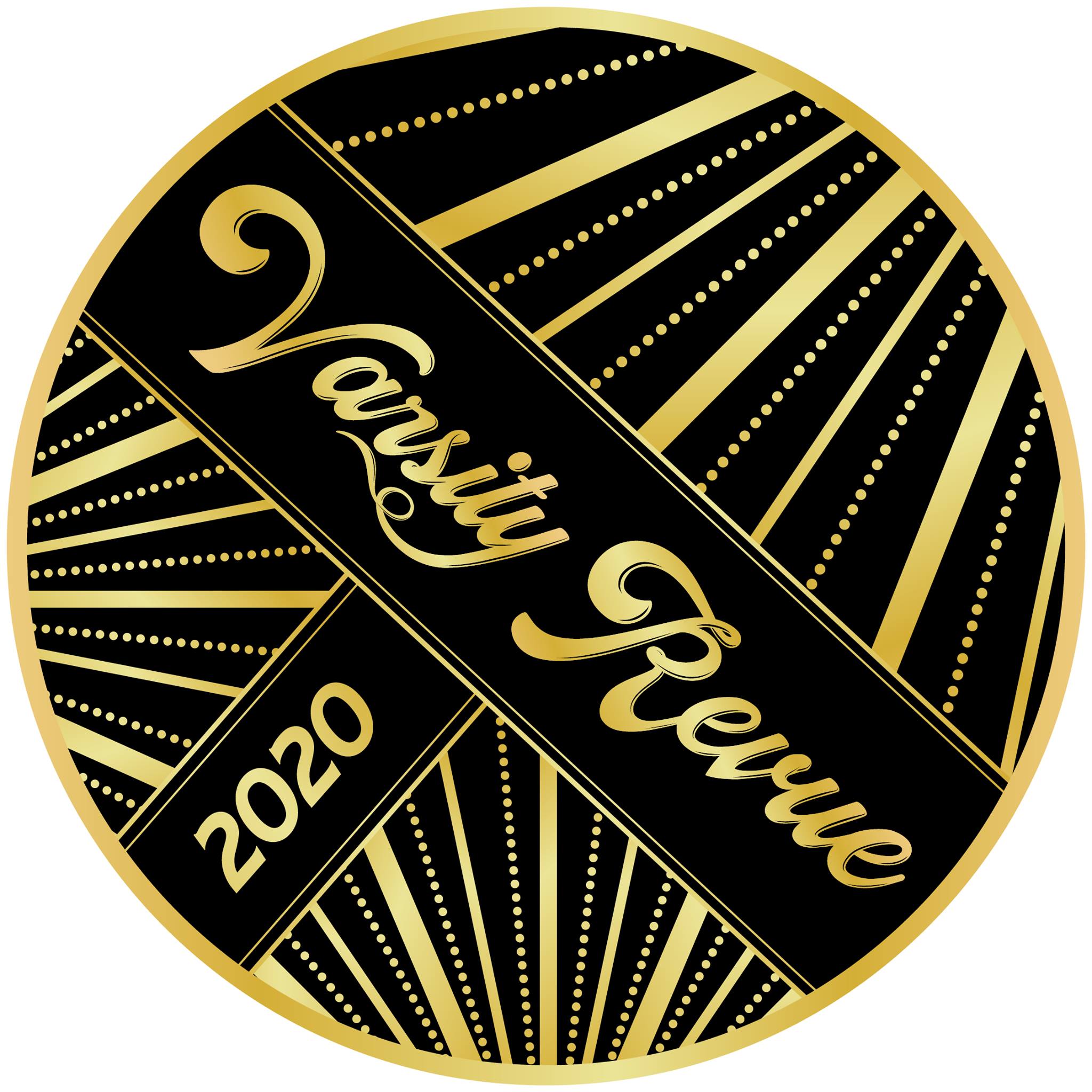 This year chapters were allowed to select their own pairings, and individual acts were placed in between group acts to entertain the audience with a variety of performances.

The 90th Anniversary of Varsity Revue at Oklahoma State Universtiy. This year also saw the return of emcees to host the show and they were Hadley Apple and Tori Denny. 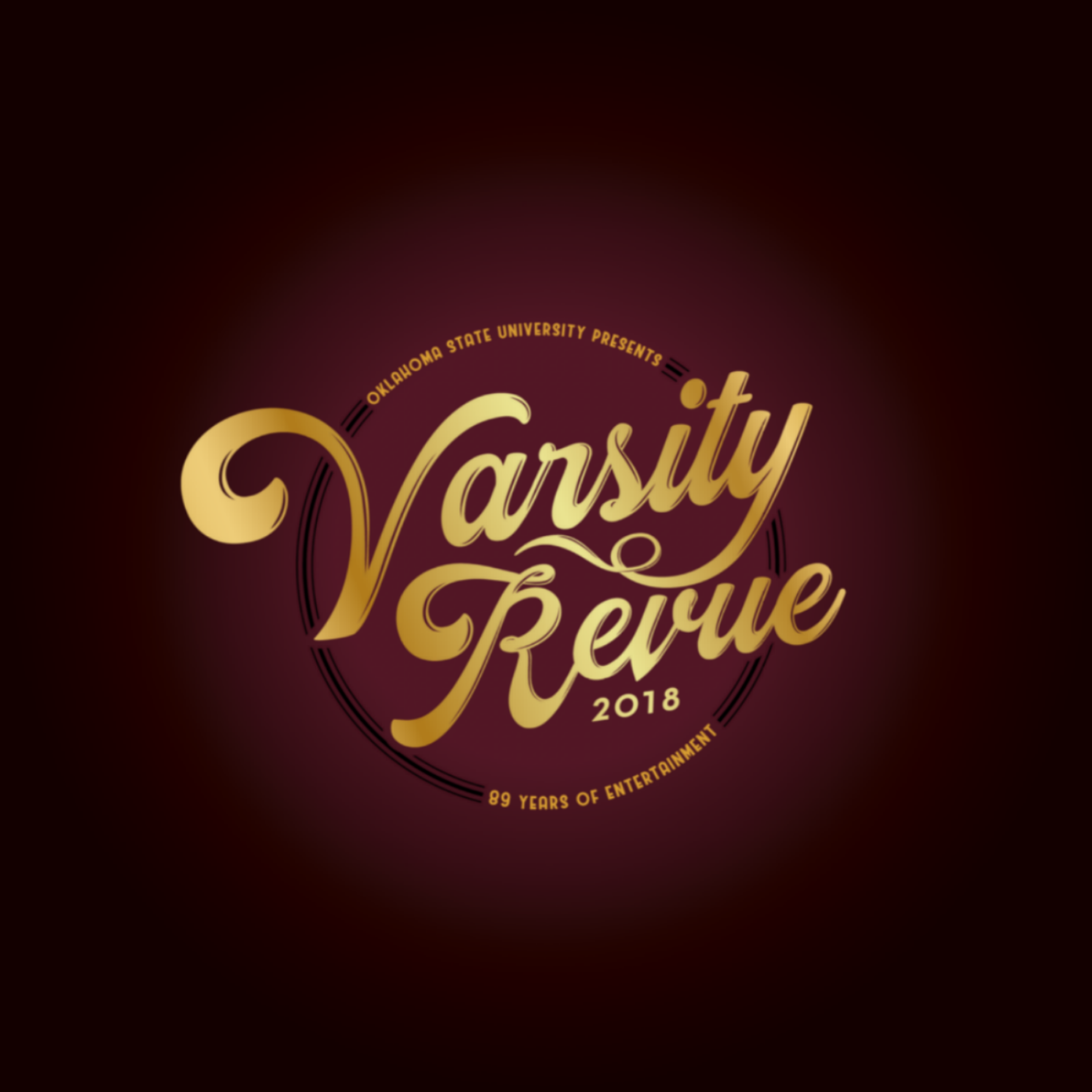 Going back to tradition, chapters were allowed to select their own pairings, and individual acts were placed in between group acts to entertain the audience with a variety of performances including Cara Greenwell, Caroline Vitanza, Cole Norton, and the Vocal Steering Committee. 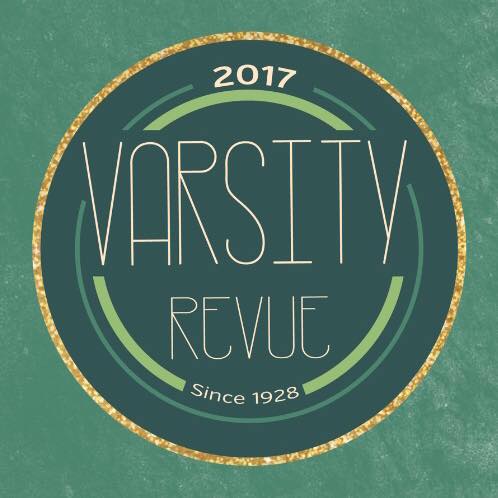 For the 2017 show, three major changes happened with Varsity Revue. Starting with the pairing process, chapters tried out individually and were then paired randomly after they auditioned. Following the tradition of change, 5 chapters were selected to place out of the eight. Individual Acts were not a part of the show this year. 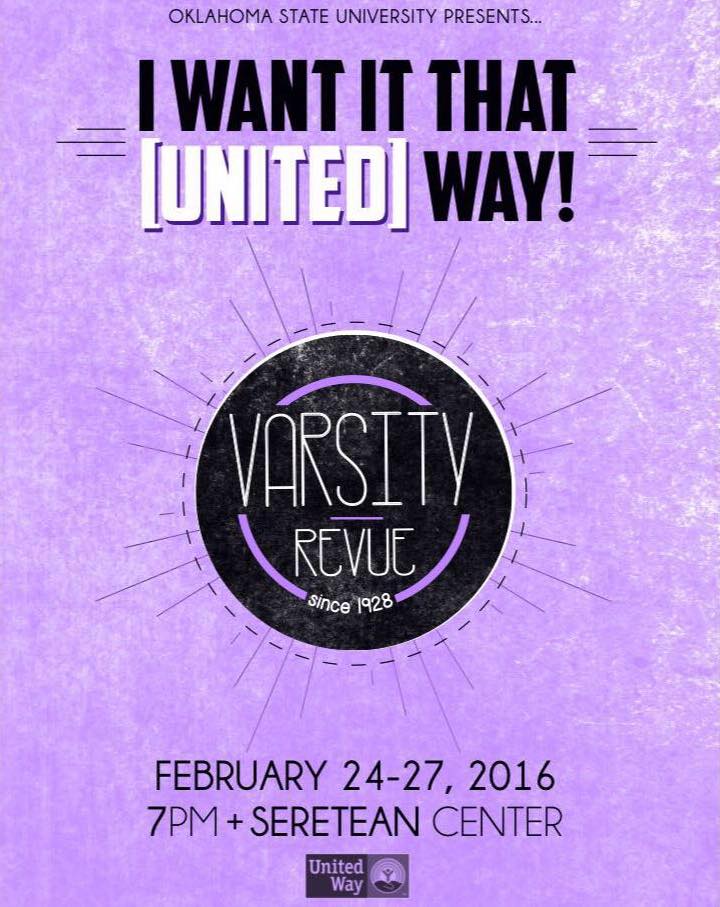 In 2013, the Office of Fraternity & Sorority Affairs officially took over the advising role for Varsity Revue.

The theme for this year was "Heard it Through the Grapevine."

The theme for this year was "Let's Give Them Something to Talk About."

For the 2010 year, Varsity Revue took place in the Stillwater Community Center. The theme for this year was "Leaving our Mark."

This year marks the 80th Anniversary of Varsity Revue, which began in 1929. The theme for this year was "Behind the Curtain."

"Under the direction of Steve Hiney, Varsity Revue staged its first performance in the New Seretean Center for Performing Arts on the revue's 42nd anniversary. The all-campus variety show was started in 1929. The Office of Fraternity and Sorority Affairs took over the advising role for the revue in 2013."

Due to wartime conditions, the acts and overall management of the event was largely supported by the women's organizations and fraternities.

Last fall the members sponsored a tea for freshman women in journalism to acquaint them with their work. Also the members have taken over from the Press Club the annual Varsity [Revue], which this year presented military as well as campus units.

Highlighting the group's activities for the year was the annual Varsity Revue presented January 12. Organized along "Hellzapoppin" lines, the production grossed more than $350, a major portion of which went into a fund to provide recreation facilities for the service groups stationed here.

Resurrecting the Varsity Revue, Press Club came through with a bang in presenting one of the finest programs of the year in spite of a declaration of work and a snow-storm.

The annual Varsity Revue was launched with Kline Culbertson at the helm. The Pi Phis as Froshy Fish topped the tidal wave and swam off with the prize.

Financial returns from the dances and the Varsity Revue annually sponsored by the club are always used for civic purposes on the campus. For several years the Varsity Revue was staged as a benefit performance to provide $5,000 worth of uniforms for the A. and M. band, which previously had been obliged to wear orange sweaters as its only uniform. It is probable that the club will apply future earnings of its benefit performances toward purchasing additional equipment for the "O'Collegian" printing plant.

"Virginia Swindle's School of Dance, put on some acts that called for more. Babe. Pat, and the man with the pipe are on their way to a preview of the revue ... The Eugene O'Neal of A. and M., Welden Barnes, wrote and produced the 1936 Varsity Revue. The Pi Phi's had the winning act and were helped by the Lambda Chi Quartet."

"The members voted to have the annual Varsity Revue stage entertainment presenting college talent, early in December, and decided that Wallis be production manager and Richert business manager. Wallis chose as his theme a university afloat and began recruiting material.

Almost all of the preceding year's Revue talent had withdrawn from school, a large number of willing but unexperienced performers volunteered to undergo the weeks of long drill necessary to make the production successful. Dolores Wadsworth, Redskin secretary, agreed to coach the choruses as she had considerable dancing experience. Frances Graham, also an accomplished dancer, and Jerry Casey, campus specialty dance instructor, assisted with the dance numbers of the show. Elizabeth Ann Steele, prominent member of the Players' Club, was made assistant director in charge of the dramatic parts by Wallis. Other assistants in the production of the show were: Harold Land, president of Players' Club; Thornton Smith, campus dance instructor; Warenne Kennedy, student musician ; and Weldon Barnes, versatile journalist and columnist.

The Revue was a success. Critics and students credited it with being the finest of a long series of Varsity Revue hits presented by the Press Club.

"The annual Varsity Revue hit a new high when the club adopted a central theme for the production. All talent was selected from the campus. The script was written by Lawrence Thompson, publicity was handled by David Knox, and the production was directed by F. E. Wallis. The house was a sell-out, and the Revue undoubtedly the most popular ever given. Nearly $50 of equipment for the stage and auditorium were donated to the college by the club from Varsity Revue receipts. This equipment is to be the permanent possession of the school."

"The Varsity Revue was launched as a means of financing the [marching band] uniforms. The vaudeville production with students as principals was immediately successful and caught student fancy. Various campus organizations sponsored acts, and all student talent was pressed into service.

In the three years following, the Varsity Revue has become the high spot of campus entertainment; not, perhaps, from the point of view of polished acting, but from the standpoint of being thoroughly enjoyable. The Varsity Revue this year, co-managed by Mickey Nicholson and Willis Collins, more nearly approached a big-time musical comedy than any other performance of it has. Prizes were offered for the best acts, and student talent worked far into many nights for over a month preceding the performance.

The Kappa Delta act, the "Club Metropole," featuring the singing of Ruth Stricklin, the dancing of Roberta Putnam and Delores Wadsworth, and a well-trained chorus, won first prize this year."

"The 1932 edition of the Varsity Revue, the third annual production, again took the campus by storm. With individual acts from many of the campus organizations working in conjunction with the brightest stars of the school's entertainment circles, the show offered the best entertainment of the year.

The Varsity Club, with its famous music, was the star of the production. The Club prepares each year an act especially for the Revue, and they are always received enthusiastically."

"Varsity Revue was established in 1929, inviting all students to compete in a talent show that raised money for new band uniforms and music."

"Staged as a decided innovation on the campus, the Varsity Revue, a night of vaudeville staged by the Press Club to raise funds for the purchase of band uniforms, packed one of the largest houses into the college auditorium in the history of the school.

While this effort was but one part of the yearlong activities of the Press organization to raise funds to meet the cost of the uniforms it was the major money- getting means of the group.

Builded around the idea of a modern vaudeville show, with acts of all kinds, including singing, dancing, orchestrations, sleight-of-hand, burlesque, and pantomime, the evening's entertainment proved to be a different type of performance for students.

It had been customary in the past history of the school for the Men's Glee Club to offer a night's entertainment to raise funds necessary to defray expenses of the group. This year the music organization of men singers, gave permission to the publications group to stage a show in view of the import of its purpose.

Confronted with the task of raising nearly one thousand dollars to make the initial payment on the band uniforms the members of the Press Club bent all their efforts toward making the show one of the best to ever be staged on the campus. Members of the College Band took over the sale of tickets and the advance sale presaged the interest evidenced by the town and campus in the show.

The night of the show found every seat in the building filled and the standing- room-only sign hanging from the door."